In 1969, the Mercedes 6.3 sedan was a beast in well heeled clothing. Some German engineer though shoving the engine from the ultra luxurious 600 pullman limosine would be just the thing for a honking sedan. And he was right. It was something akin to dropping a locomotive engine in the family Ford. Indeed, if you pulled the engine and set it on the floor, it would dwarf any American engine, and this from 360 cubic inches. 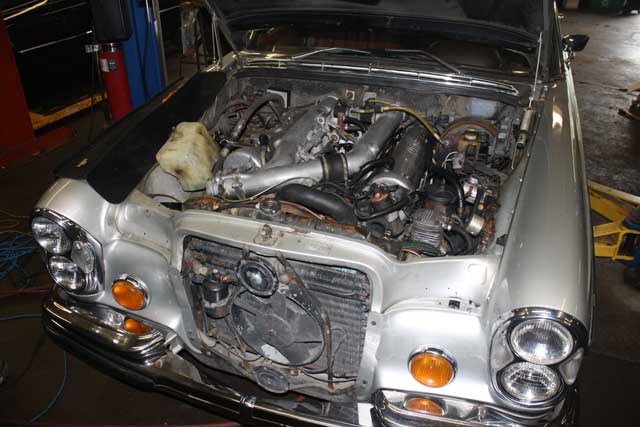 It was the fastest 4 door production car in the world in 1969. The car was heavy but the 300 horsepower from this mechanical fuel injected engine could pull all day and didn’t get tired. Back when I worked on these cars in the late 70’s, the Mercedes rep, Gunther Ficke, told of a time when he was heading out west in a 6.3 when a Superbird came up from behind. Gunther’s national pride took over and these two cars were side by side for almost an hour when the the Plymouth’s engine blew. The Benz’s engine wasn’t going to blow, no matter what.

Tuning these cars was a job, from adjusting the mechanical pump for fuel, and setting the dual points in the distributor. At least they left off the dual alternators and the hydraulic water pump from the limosine, it wouldn’t have fit under the hood anyway. Impressions of driving this car back in the day remind me of how it feels to drive a modern BMW M-5. Power, power and more power, although pushing it a lot is pretty rough on tires.

All pictures were taken at Cincinnati Motor Car